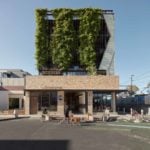 Building well-designed, community-oriented housing for owner-occupiers, rather than investors.

Completed in 2014 by Breathe Architecture in Melbourne, Australia, The Commons is a 24-unit multi-residential building with a focus on sustainability and community. Following the German Baugruppen movement and in the face of prolific speculative development in the city, the solution was to change the financial model – using architects as the owners and investors, thereby keeping the building quality high. However, due to the poor economic environment of 2007, the project was ultimately taken on by ethical developer Small Giants. The Commons has served as a prototype for many of the ideas inherent to the Nightingale Housing’s subsequent model, from material reductionism to the social impacts of shared facilities. The Commons’ unique approach has gained widespread attention, sweeping national awards and inspiring numerous alternative housing delivery models in Melbourne. All Design Showcases from Nightingale: